Well today is 10 days since throwing out the pull-ups. (Well actually they are sitting up on my closet shelf- until I find someone to give them to.) Holden has been doing so good. I'm really amazed. I don't want to jinx it *knock on wood* but he has had hardly any accidents. And best of all he does great at nap time and during the night. He hasn't wet the bed at all!!! I'm so proud of him.

Going number 2 has been a little harder but we're getting there. We finally coaxed him into doing it in the potty by telling him we would give him icecream. It worked. He went and even though it was like 10 minutes 'til nap time we kept our end of the deal and went out for icecream.

Well we have been preparing for this for a really long time. I bought Holden his first potty around his 2nd birthday.

Here he is using the potty shortly after we bought it: 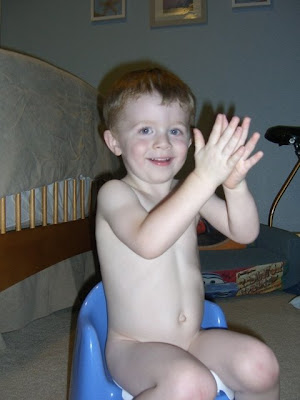 He never showed much interest in using the potty. As he got older, he would use it from time to time. But never really on his own... only after we asked if he needed to go.

This week we started asking him while in public. He almost always would go. Yay!

Right now I have him taking his nap in underwear. Not pull-ups..not diapers... but big boy underwear. His mattress is protected by a cover (thank God!) and I have his little baby bjorn potty in his room (just in case). I'm really anxious to see if he wakes up dry.

Today I've been having him wear underwear. It's hard because a lot of times he won't tell me if he has to go. He's pretty good about the peeing part (most of the time) but we still have a lot of work to do with the pooping.

I figure it's now or never since he's about to be 3 1/2. I really don't want him peeing in his pants when he's in kindergarten. LOL.

So that is what we've been up to.

In a couple weeks, we are taking a vacation. Wahoo! We are going to Colorado to visit my inlaws.

I'll be sure to take lots of pictures.:-)