My baby is growing up! He's transitioning into a bed!

Yesterday we went out and bought Holden a mattress set. We don't have his bed yet, but we're just going to put the mattress set on a frame for now. I don't know if I am ready for this transition, but dh thought we should give it a shot. We bought a full sized set because Holden moves around a lot.

Last night we gave it a go and Holden did great! He went to sleep pretty quickly and slept all through the night. He didn't wake up until after 9. I went in his room and took pictures of him, but it didn't wake him.

After a while..I heard a tiny knock on his door. He had a huge smile on his face when I opened it. (We put one of those child proof knobs on the inside of his door. I don't want him roaming the house in the middle of the night!)

Nap didn't go as well, but we'll get there! It took about 1 1/2 hours for him to settle down for his nap. I wasn't here. I was at the doctor getting an ecg. Holden was still "talking" when I came home. Soon after it got quiet so I thought I'd check in. First I looked under the door to make sure he wasn't in front of it. Sure enough he was! He had fallen asleep on the floor right in front of the door.


I can't believe my baby is out of crib. This came too soon!

I have a little fish on my hands.

Holden loves water. He has always loved his bath (well alway minus the newborn phase, lol). Lately we've been taken him swimming at my sister's apartment. He loves that. See him and his Daddy having fun. This Saturday we purchased one of those easy set pools. We set it up this afternoon. Holden couldn't wait to get in LITERALLY.

We all had a great time in the pool. It was a little cold, but we got used to it. Hopefully the sun's rays will warm it up pretty good for next time!

Let me end with a couple more pictures.

Since I tragically lost my sweet dog, Toby. On May 24, 2006 he was hit by a car. I still feel sick to my stomach when I think about it. He shouldn't of left this world like that.. not my Toby. He should of died peacefully in his sleep when he was much much older. He should of grown up with Holden. There should of been so many more days with him. More belly rubs. More sitting under the computer desk, keepig my feet warm, lol. More cuddling in bed with me. It's just not fair.

He was such a great dog in so many ways. Sometimes I get scared that I'm starting to forget about him. You know how all dogs have little quirks that make them different from other dogs. I sometimes have to strain to remember his. Why does time do this? I still remember a lot but it feels like it's getting foggier. I remember how he had this excited cry sound that he would make when we would come home. He always missed us so much when we were gone. He loved us just like we loved him. You could tell.

Oh Toby... why why why did you get out of the backyard that day? I wish this had not happened. I wish you were here with us still.

I know that you would not want us to be sad. So I will try not to cry too much when I think about you. I can say it has gotten a little better. Right after you left us all I did was cry... now I have gone on with my life. Sometimes I can even smile when I think about you instead of just feeling sad. However unlike the saying goes, Time does not heal all wounds. 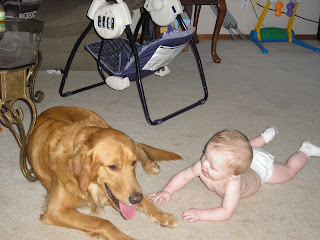 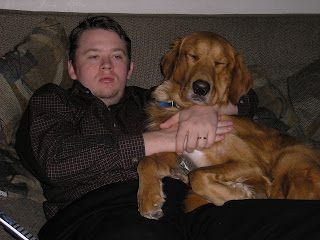 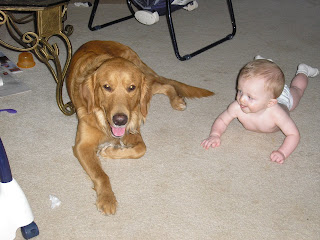 p.s. I know some people wouldn't understand how a person could get so worked up over a dog. However for those of you who have a dog as special as Toby is to me (still find it hard to say was) ,you can relate.

Today was the day Holden was having surgery to get tubes. I started out the day with knots in my stomach. I woke up at 7am because I was so nervous. I went to wake Holden around 8:30. He was peacefully sleeping. 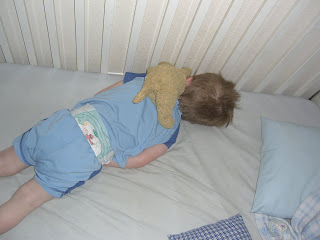 We went to the hospital, registered, and got a room. Poor baby had no idea what was to come.. He was just chillin' while watching Dora. 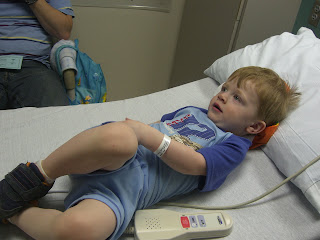 After a while they took us to the OR holding area. Here they gave Holden some medicine to calm his nerves and make him drowsy. Soon after he started acting drunk. It was so crazy.

Then they took him. It was so hard watching them wheel him off. We went to the cafeteria to try to pass some time. The doctor had told us it would take approx. 30 minutes. After the cafeteria, we went to the waiting room. The wait was so incredibly difficult. Soon 30 minutes came and went. Then 35... then 40... by the time it had been 45 minutes I was getting so anxious. I kept thinking 'something must of gone wrong'. Finally Holden's doctor came into the waiting room. He said the surgery went GREAT! A flood of relief rushed over me. He said the hearing test they performed while he was still asleep showed that his hearing was perfectly normal. I asked him how much fluid was in his ears and he said a lot. It really made me feel like we made the right decision. He said he could tell the fluid hadn't been sitting in the ears because there wasn't any mucuous, but that it probably came and went.


The most difficult part is, exactly what everyone told me would be, seeing him afterwards. We met him in the PACU (Post Anesthesia Care Unit). When we walked in, I immediately saw him behind the first curtain. I ran over there and saw that he had been crying. The nurse said he had just woke up. He was very upset. He looked flushed. He cried for about 20 minutes straight. It was heartbreaking. Normally if he's upset I can hold him my arms and he is better. Not this time. He got so upset, at one point, that he ripped out everything he was connected to (the iv, arm cuff, pulse ox.) After a while the nurse brought a t.v. and we watched Toy Story. She also gave him a popsicle. These things helped TREMENDOUSLY.

He had to be observed for about 1 1/2 hours or so. With the exception of the first 20 minutes after surgery, he has been in a GREAT mood.

I am very relieved to have this day behind us. Hopefully this surgery will greatly improve his speech! 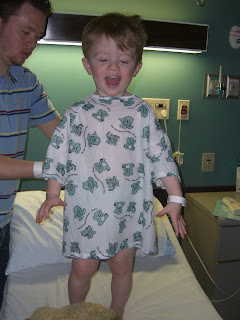 Tomorrow Holden is having surgery...

At 10:00 tomorrow morning Holden is getting tubes put in his ears. He's been having a lot of fluid sitting in his ears, the doctor thinks that is why his speech is delayed. I'm a little nervous. I know it's a common procedure and it is very quick... but still any kind of surgery is a little nerve wracking. Please pray that everything goes okay!

My friend, Mandy, tagged me. I don't know if I know 7 other bloggers to tag.. Oh well first, here are some wierd things about me!

2) I sometimes pull my hair... I'm getting better though!

3) My pinky toe on my left foot grows up instead of out.. lol. It's freaky!

4) On my shoulder, I have 3 freckles that connect to form a triangle.

6) I have OCD when it comes to locking doors. At night I check the front door a few times before I can go to bed.

7) I cannot wink or whistle.